Since blogger does not allow me to upload files beyond images I'll continue posting on https://sites.google.com/site/rndmthngs/.
Posted by Chris Petrich at 11:58 AM No comments:

Some Garmin GPS receivers get a simple mathematical conversion wrong that causes them output incorrect coordinates in their NMEA sentences. The only NMEA data streams I looked at are those of the Garmin GPS 16 and Garmin GPS 18 OEM, and those suffer from the software bug described below.
Example: walking slowly and logging one coordinate pair per second as output in the NMEA sentences of the GPS 16, the following records were obtained.

GPS receivers calculate their position relative to a set of satellites in Euclidean space, i.e. the same coordinate space we are familiar with since high school. I think Garmin receivers do a nice job at that, in particular considering their price. In my limited experience, all Garmin GPS receivers seem to do this correctly. While presumably all Garmin receivers display and store correct coordinates, at least some receivers occasionally (but systematically) output wrong coordinates through their serial interface. If you do not connect anything to your Garmin that receives GPS coordinates in real time then you can stop reading here and continue enjoying your purchase. Have fun.

For those of use who do connect stuff to our Garmin receivers, we can sometimes choose between two data formats: the proprietary Garmin binary format, and the standard (ASCII) NMEA sentences. This blurb applies to data transferred from the GPS receiver in NMEA sentences, only. From what I can tell, the binary data stream is correct.

Some Garmin GPS receivers are able to output data through a serial (and recently USB) interface. The non-proprietary format used follows NMEA 0183 specifications. In this standard, data are transmitted as plain ASCII text. Coordinates are represented in a somewhat peculiar format as DDMM.FFFF, where D is decimal degrees, M is minutes, and F is fractional minutes. For example, consider 71.36 degrees. This is 71 degrees 21 minutes and 36 seconds, i.e. 71 degrees 21.6 minutes, and would be transmitted as 7121.6000. At least the following OEM receivers have a software bug that does the conversion to the DDMM.FFFF NMEA format wrong: Garmin GPS 16 (discontinued) and Garmin GPS 18 OEM-PC (still available as of 2010). Note that I am not familiar with the NMEA output of the Garmin GPS 18x or any other Garmin receiver.

At the heart of the issue seems to be a combination of sloppy programming in conjunction with the use of low resolution (single-precision, IEEE 754) floating point arithmetic.

Consider the following case: we attach an external data logger to a Garmin receiver that reads the NMEA sentences to keep track of our position while we walk very slowly, at something like 0.5 meters per second, due North. We may find the following (this result is simulated with the script below):

Doing the same experiment a bit further to the South we find (this result is simulated with the script below):

I have seen this error occur over and over again in both latitude and longitude in the region around Barrow, Alaska. However, I bet this problem is more general and will be observable at certain minutes all around the world, including in San Francisco (37° 46' N), and New York (40° 31' N) — in case somebody would like to check.

How can we reproduce this error? Well, for example with the following Python 2.x script:

The remedy may be obvious: if this bugs you then write to Garmin and request a firmware patch for your receiver. Happy geo-locating!
Posted by Chris Petrich at 11:09 PM 1 comment: 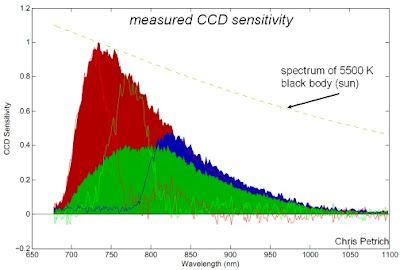 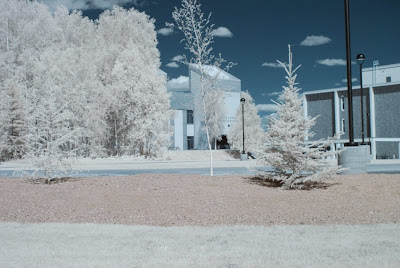 I was looking for a system with the following key features
The D60 bundled with the 18-55mm lens seemed to have been the best compromise back in April 2008. The CCD chip is significantly bigger than what is used in "point-and-shoot" cameras; this is where size does matter: the bigger the pixels the higher the signal-to-noise ratio. A full frame (FX) camera would have been even better but considering point 2, price, this was not an option. Seeing that the D60 came bundled with the relatively cheap and good 18-55 mm lens, and that this lens actually produces no hot spots there seemed to have been only one alternative: the D40(x). However, the D40 uses an older image processor that does not allow to define the whitebalance based on a green image...
Problem with Canon was that their lenses of suitable focal lengths happened to produce hot spots unless I was willing to pay big bucks. If I were to buy a new system today I'd take into account LiveView capabilities in today's DSLRs.
Posted by Chris Petrich at 10:46 AM 1 comment: